What do the Quebequoise poutine, chili cheese fries, and Albany’s Bomber’s “piggy fries” have in common?

Each boasts a gravy, a meat, and a cheese drenched over french-fried potatoes. Reach a fork into the mix to pull out a potato and a string of cheese clinging to the plate. The softened potato naturally pairs with a hot melted cheese and meat sauce. This is the beauty of such a meal. It’s so simple yet offers the flexibility of a variety of ingredients in each category. Which gravy? which meat? and which cheese?

The Quebequois have made an art of creating satisfying answers to these questions. Poutine is a national dish originating in the Quebec province of Chicoutimi in the 19th Century. And yes, Quebec takes the invention very seriously. There is an entire website devoted to the poutine: check out poutinewar.com. Poutineries can be found in every province with long menus of multiple combinations of cheese, meat, and gravy that comprise the dish, and fine restaurants feature their own exquisite variations. Eric and I discovered the wonders of the poutine in May 2010 in Montreal while looking for after-hours eats. We wandered into La Banquise to find what some consider the best poutinerie or the most “overrated” in Montreal. Suffice to say, we were hooked!

Back in Albany, only four hours away from Montreal, the closest pub snack we could find to the poutine was Bomber’s “Piggy Fries,” which is a load of pulled pork, BBQ sauce and melted cheddar cheese over french fried potatoes. When Capital City Gastropub opened in our neighborhood, we were stunned by and quite happy with its “finer” version of the poutine drenched in duck gravy. Now the Gastropub features a number of poutines: one with mushrooms and another with foie gras! Check out their fall menu here.

Of course, we also like to make poutine fresh at home with our choice of yummy cheese and potatoes.

We at The Cheese Traveler have created a close second to the poutine: boiled and baked potatoes to cut down on the artery-clogging shot of cheese-meat-gravy and fried carcinogen.

Adirondack Blue Potatoes sprinkled in Challerhocker and a pat of Butter. 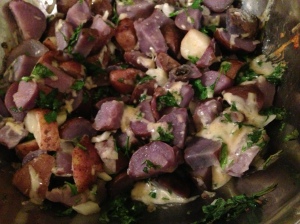 Challerhocker (which translates as “one who lingers around the cheese cave”) is a flavorful addition to these boiled and baked potatoes.

Boil potatoes in salt. When soft, drain the potato broth to be used in any number of other dishes as a starchy stock for soups.

Mixing up the ingredients.

Place boiled potatoes on a flat baking pan or a big steel bowl as shown here. Mix them with other ingredients.

Putting the potatoes in the oven to melt the cheese…also making toasts from All Good Bakers rye bread. Very yummy together!

Bake for thirty minutes in a 350 degree oven or until all cheese is beautifully melted over the potatoes. Feel free to turn them once or twice to keep the potatoes coated in butter and cheese.